Gene therapy is a technique which will be used in future to treat and also prevent thalassemia. The gene which gives rise to this disease will be replaced by the healthy genes so that it helps to fight the diseases.  Diseases which are inherited, few cancers and some viral infections which cannot be cured by any other medications will be cured by Gene Therapy.

How does it work?

Mutated genes which are the cause of diseases will be replaced by healthy genes. These new healthy genes will help to fight against the diseases. A carrier called Vector is used as the channel to insert the gene. Virus is used as Vectors because they can easily infect the cells. Further, these virus are modified so that no new disease arises during the therapy. Virus such as retrovirus collects all the genetic material into chromosome in the human cell. Adenoviruses, introduce their DNA into the nucleus of the cell, but the DNA is not integrated into a chromosome. The vector is directly injected into the specific tissue of the body and from there individual cells are affected.

An alternative method to perform Gene therapy is to remove a sample of patient’s cells and let it get exposed to vector in medical laboratory. And then, these cells are returned back to the patient’s body. 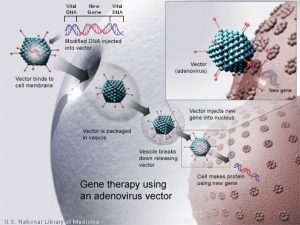 Gene therapy includes changes to the body’s basic set of instructions so moral issues are raised.

One cannot decide if gene therapy is good or bad because for few people it may result as a life saver and for others it will just be against the morals. We cannot decide whether the traits come under disability or disorder. Is gene therapy available only to wealthy people because it is an expensive treatment?  Should people be allowed to use gene therapy so that they can enhance their basic traits like height, intelligence? These issues must be looked into before making gene therapy for patients. Germline gene therapy is a type of therapy where gene therapy is targeted to egg and sperm cells. It will help in sparing the future generations from disorder but it might affect the development of fetus in different ways and there are no long-term side effects for now which can be taken as pre-cautionary measures. Because people who would be affected by germline gene therapy are not yet born, they can’t choose whether to have the treatment. Because of these ethical concerns, the U.S. Government does not allow federal funds to be used for research on germline gene therapy in people.

Trials are still going on for gene therapy and it will take time to have gene therapy as a treatment for thalassemia. It is said that within next 3 years, gene therapy will exist in India.